We have made great strides over the last two decades in the fight against youth tobacco use. In 2000, 23 percent of teens smoked, a proportion that dropped to an all-time low of 4.6 percent in 2018 — a remarkable milestone for public health. Truth Initiative is proud to have significantly contributed to that decline through our youth smoking prevention and education campaign, truth® which has prevented millions of young people from becoming smokers, including more than 2.5 million in the past three years alone.1

Unfortunately, that victory is at risk as the most recent National Youth Tobacco Survey showed e-cigarette use was up by 78 percent among high school students and 48 percent among middle schoolers in just one year. The epidemic spread of e-cigarettes, primarily via JUUL®, a sleek, high tech device that looks like a flash drive and has amassed a cult-like youth following, risks a reversal of progress in the fight against youth smoking.

While e-cigarettes may be less harmful than combustible tobacco products — which remain the leading cause of preventable disease and death in the country — a single JUUL pod contains as much nicotine as 20 cigarettes. Several studies, reported in JAMA and summarized by the National Academies of Sciences, Engineering and Medicine, have found that young people who use e-cigarettes are more than four times as likely to begin smoking tobacco cigarettes compared to their peers who do not use e-cigarettes. This is particularly troubling as many of these are low-risk youth who never used cigarettes.

The truth is, e-cigarettes did not become so popular with youth by accident. The companies emulated tobacco industry tactics, including offering flavored products—a top reason young people use e-cigarettes—which come in a range of flavors from mint and mango to “strawberry shortcake” and “unicorn vomit.”

Like Big Tobacco, e-cigarette companies also enticed youth with their marketing. Researchers at Stanford University found that “JUUL’s advertising imagery in its first six months on the market was patently youth oriented” and that it used traditional tobacco industry advertising themes, including pleasure, relaxation, romance and identity, that may draw adolescents to smoking. And, by conducting its campaign on social media platforms, the company multiplied its own million-dollar investment many times over through more than 30,000 consumer uploaded YouTube videos with 100 million-plus views.

JUUL let our kids do its work.

As the e-cigarette epidemic worsens, Altria, makers of the best-selling cigarette brand, Marlboro® announced it had invested a $12.8 billion stake in JUUL Labs. The leader in e-cigarette sales went from acting like Big Tobacco to financially aligning with Big Tobacco.

The Food and Drug Administration currently regulates cigarettes and smokeless tobacco products. In 2016, the agency issued regulatory requirements for e-cigarettes but has since announced that it is delaying fully reviewing and regulating e-cigarettes until 2022 (recently proposing to move up that date by one year to 2021).

We can’t and shouldn’t wait two more years for FDA to do its job. The agency must act immediately to prohibit the sale of all flavored tobacco products, ban online sales of e-cigarettes until stronger safeguards are in place to prevent sales to kids, restrict marketing that attracts youth, and enforce rules prohibiting the sale of new products without FDA authorization.

In the absence of stronger regulations and swifter action, the need for education and prevention could not be greater. In August 2018, Truth Initiative launched its first-ever e-cigarette campaign titled “Safer ≠ Safe” underscoring that while e-cigarettes might be safer than combustible ones for smokers, that does not mean they are safe, and that, according to JUUL, one standard JUUL pod contains the equivalent nicotine of a pack of cigarettes.

Also, see our infographic on the prevalence of e-cigarette usage among America’s youth.

Truth Initiative is an independent 501(c)(3) non-profit organization. All company names and brands are property of their respective owners, used for identification purposes only, and are in no way associated or affiliated with the Blue Cross and Blue Shield Association. Use of these names and brands does not imply endorsement. 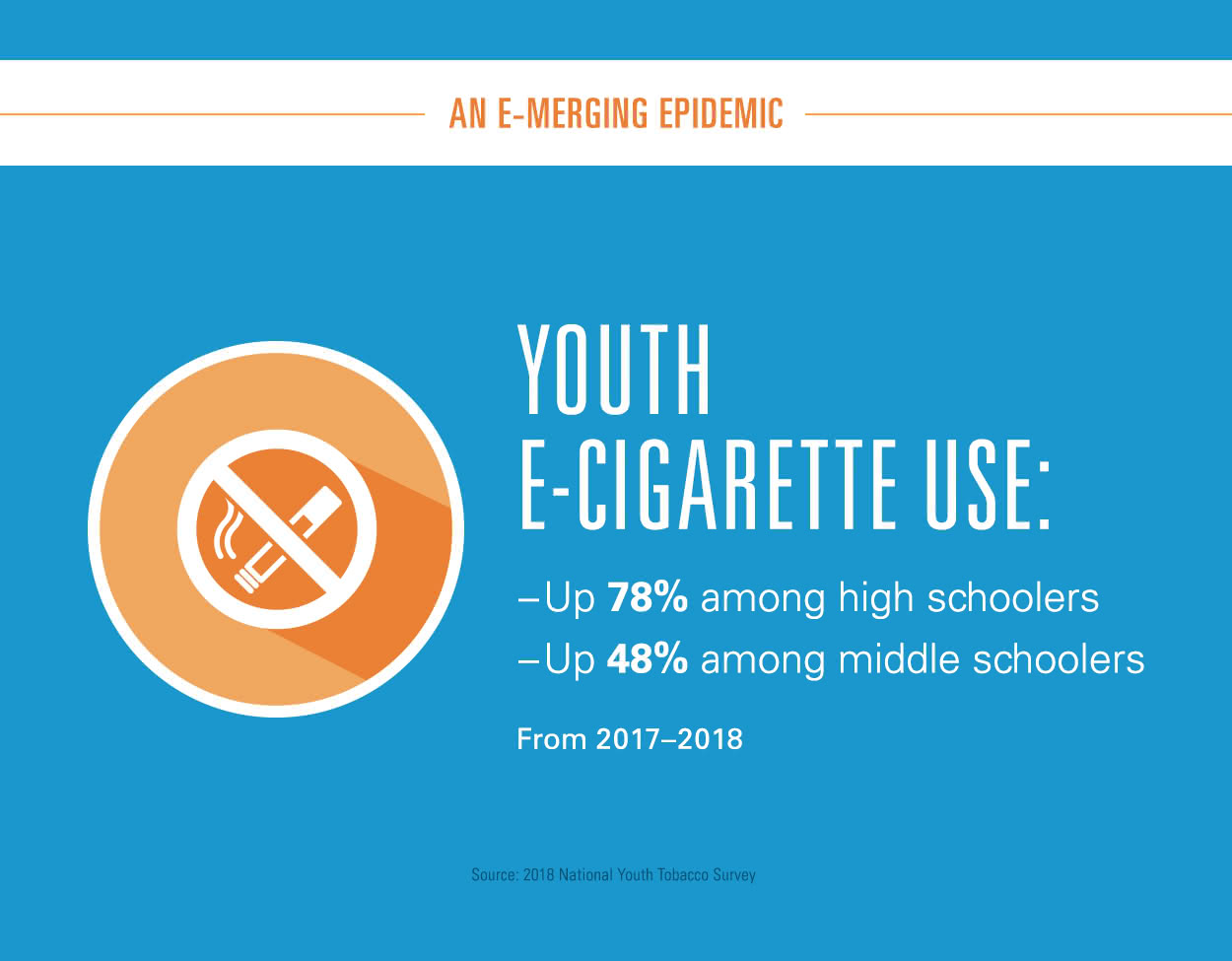 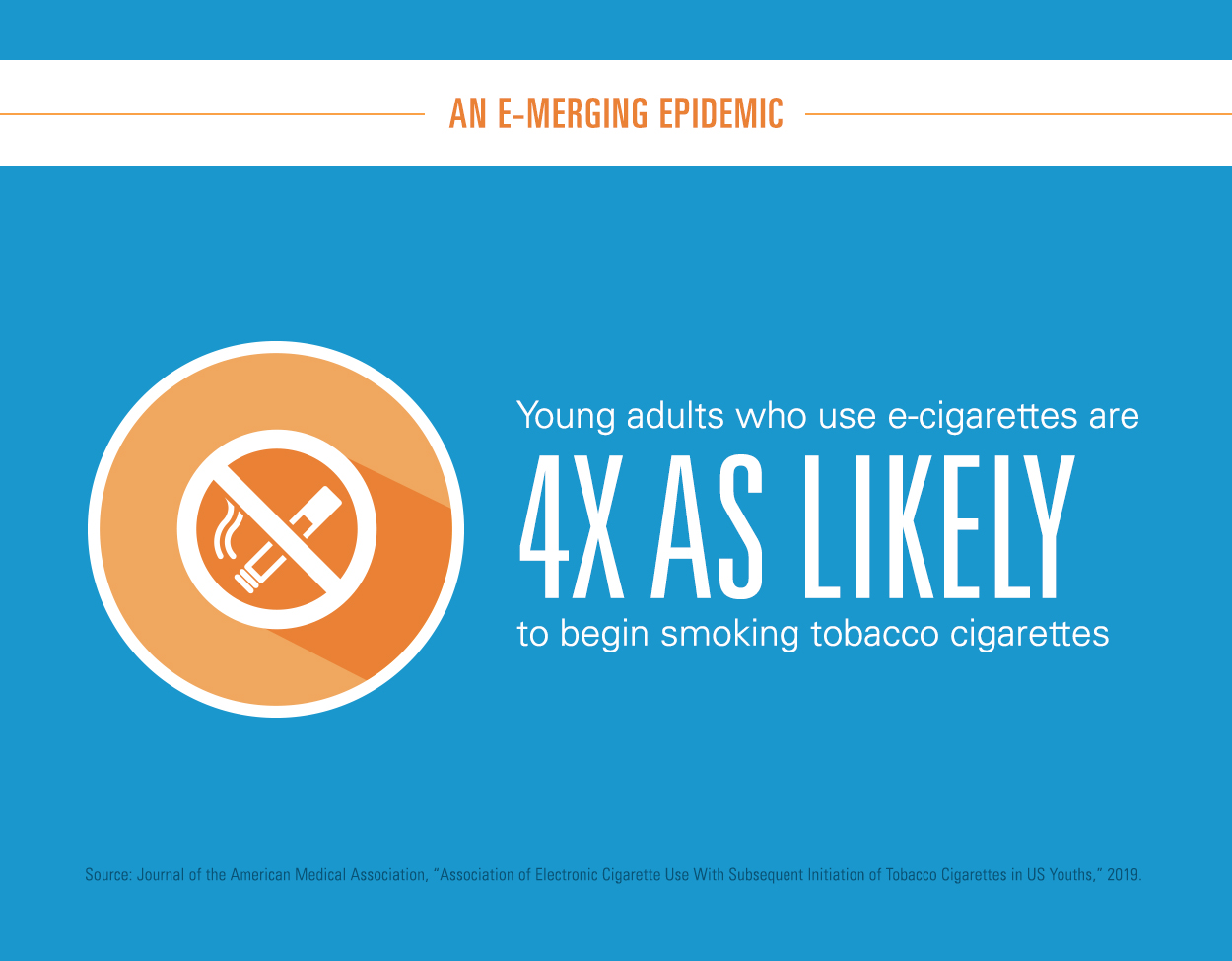 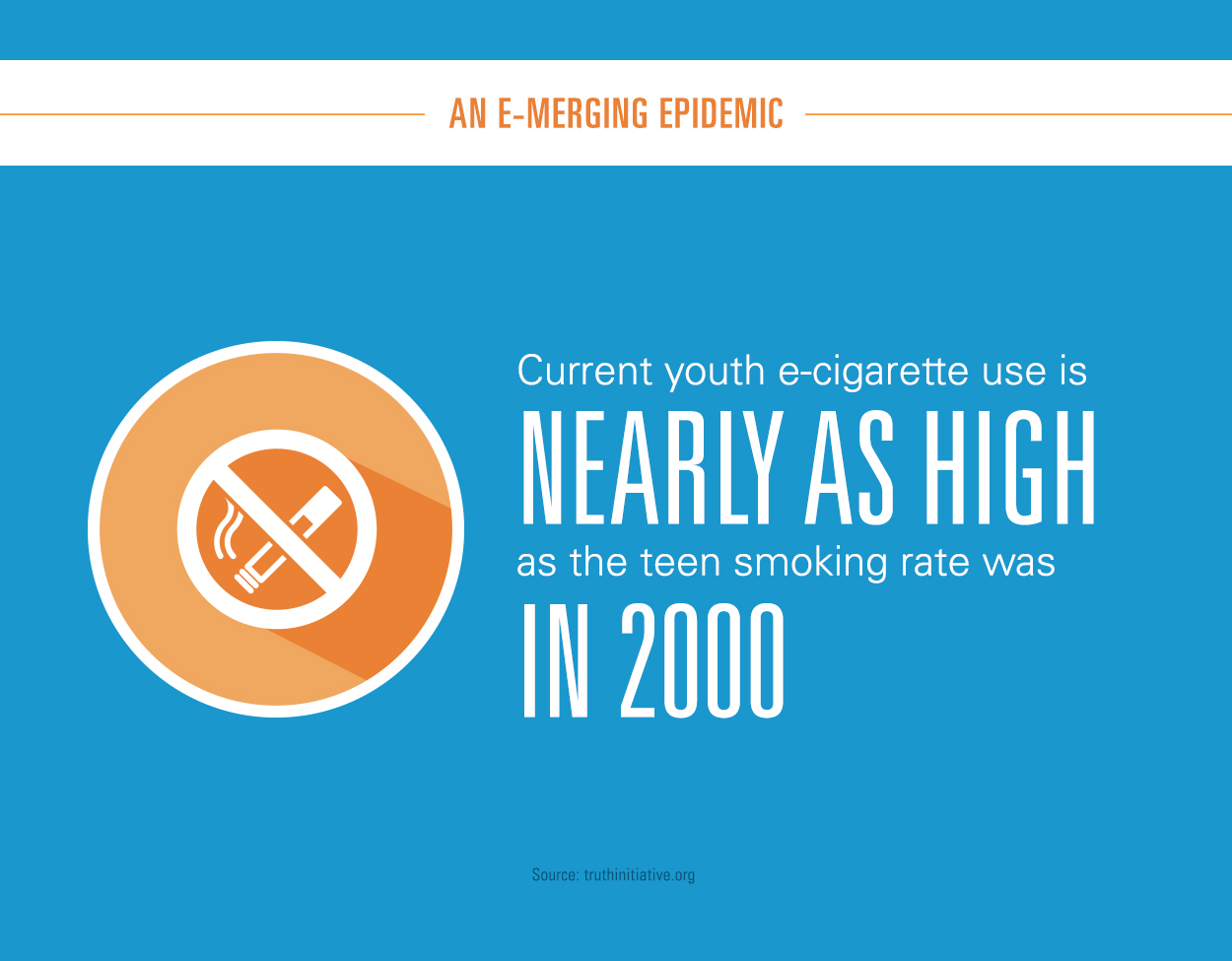